Read about Raquel’s trip to France to meet with our collaborators!

Read about Raquel’s trip to France to meet with our collaborators!

When I began graduate school, I didn’t expect that I’d have the opportunity to participate in research spanning two continents and multiple universities. But, thanks to a fascinating project, funded by the National Science Foundation’s “Science of Science and Innovation Policy” program, I’ve had the pleasure of collaborating with students and faculty at multiple universities here in the United States and France.  So I wanted to share my excitement about this project with our community of interdisciplinary and international scholars.

This project is part of a research grant on global multiteam innovation with Leslie DeChurch (Georgia Institute of Technology), Steve Zaccaro (George Mason University), Steve Fiore (University of Central Florida), and Barthelemey Chollet (Grenbole Graduate School of Business). As a member of this team, I had the unique opportunity to travel to Grenoble, France to facilitate the study and aid our French collaborator, Barthelemey Chollet (GEM), and his students through the research process. My role quickly expanded to include leadership responsibilities in the overall administration and management of the project. As interesting as the innovation project was, the nature of our research team also brought on interesting situations. We were studying global multiteam systems (MTS) collaborating to solve a complex problem, and we were, ourselves, a global multiteam system collaborating to answer a complex question. As a student based out of Northwestern, working in France, and part of the leadership team, my role had a unique set of responsibilities. 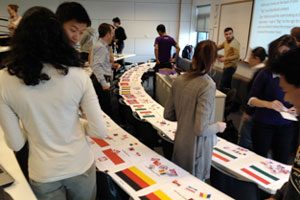 The Grenbole Graduate School of Business (GEM) is located at the heart of a city in France that is second only to Paris in its reputation for public research. Nested within the towering French Alps, Grenoble is reputable for its research in an array of fields such as physics, computer science, molecular biology, political science, and humanities (also for being the capital of the Dauphiné, and the Olympic Winter Games in 1968). Grenoble’s is aspiring to become one of the world’s prime locations for research and innovation.

The complexity of this project is multifaceted. We developed this as a “multi-team” and multidisciplinary collaborative endeavor with teams made of students from classes in social psychology, environmental science, and business strategy. As “experts” in their functional domain, the students had to collaborate as a team of teams (or “multi-team system” (MTS) to solve the problem of the depleting Atlantic Ocean fish stock. Each MTS’s functional areas included ecology (emphasizing the environmental and societal consequences of the problem), social psychology (focused on attitude and behavior change solutions), and strategic innovation management (analyzing the value chain impact of the generated solutions). Besides divergent views and terminology, these student teams were also confronted with geographical distance (and thus a high degree of virtuality), cultural differences, and a substantial time zone difference.

The students at GEM are, themselves, from diverse backgrounds and disciplines. My personal experience with the students was in a Masters of International Business (MIB) course on Managing Technology. This group of students served as part of our first intake for the project. I was impressed with the professionalism of these students as I quickly learned that they would not take any sort of direction without a clear understanding of its purpose and relevance to their program. They took full advantage of the time that I spent with them. In every class we spent time discussing their questions, concerns, and even suggestions for the direction of the project.

Meanwhile, I also had to prioritize my duties with my American colleagues. There were a number of meetings on administration, data collection, and instruction. As the virtual leader of the team at Northwestern, I was expected to function as a boundary spanner connecting the US-based research teams to the French-based team (i.e., between team collaboration of our research team), and also facilitating subtasks assigned to my team at Northwestern (i.e., within team collaboration). Balancing these often competing demands, and doing so solely through virtual tools presented many unique leadership challenges. Through my role on the MTS, I experienced firsthand many of the very challenges of multiteam leadership that were the focus of our study! 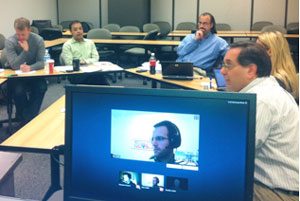 Each week brought an outpouring of emails with various concerns. The same complaints were coming from both sides, from people on the same teams. The GEM students didn’t think the GMU students were participating enough, while the GMU students didn’t think that the GEM students communicated enough. Some teams were able to figure out a collaboration structure that worked for them, while others struggled through the collaboration both within their team and with the MTS.

Our research team went through similar struggles. Working from four separate universities proved to be a challenge even for a research team made of “team researchers”. Things would at times get lost in translation, work overlapped, information would slip through the cracks, and the mountain of emails and schedules was difficult to balance. But, through perseverance, and “practicing what we preach”, we prevailed and successfully completed this very sophisticated data collection. Then, to help evaluate MTS performance, we brought in a set of policy experts with experience in environmental policy at the national and international level. This provided an important grounding in real-world decision making by adding a perspective foundational to solving complex societal problems.

By the close of the project, we were all very excited about what had transpired in the previous weeks, and exhausted by all of the hard work. The grant’s principle investigator, Leslie DeChurch, traveled to GEM to debrief the project with the Innovation Management teams. Steve Zaccaro and Lorelei Crerer debriefed the Social Psychology and Environmental Ecology teams at George Mason. The course instructors likely learned as much from the students as the students learned from them. There were a number of “aha” moments in those debriefings. These fueled our curiosity and were used to inform our project meetings over the winter break as we planned our next experiment. Illustrating the value of participation to the student teams themselves, they were all “wowed” by the graphical displays of what had occurred in their multi-team systems during the project. They could see how the most successful MTS stood out from the rest in terms of their leadership, communication, and trust network structures. It was suddenly clear to them how important and beneficial this project was, and why it was worth going through weeks of surveys, deadlines, and hard work. 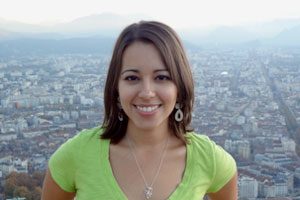 As participants, the students were able to take with them a realistic experience about working with others from different disciplines and different cultures. It was also an eye opening experience that taught them the global nature of work and the challenges associated with such endeavors. As a research team, we were able to acquire the data to answer important questions about distributed, interdisciplinary scientific collaboration. This was in addition to the lessons learned from our own project team, which now serves as a great anecdotal example. For us, the collaboration continues as we launch our second round of the innovation project in the spring. I’m passing the torch to Dorothy Carter, who leaves for France in just a few weeks to facilitate “Phase 2.” I will miss my mountain views and delicious croissants, but I am left with a memory and an experience that few PhD students are offered in their graduate careers. Not only was I able to immerse myself in a completely new intellectual culture, but I was also able to experience a new social culture by enjoying the thrilling experience of living in a different country. To France, it’s only “au revoir” for now, as I hope that this grant is only the beginning of many opportunities for collaboration with our colleagues abroad.

Learn more about our projects