Innovate Against Time: Drivers and Mechanisms of Knowledge Innovation Within and Across Organizations 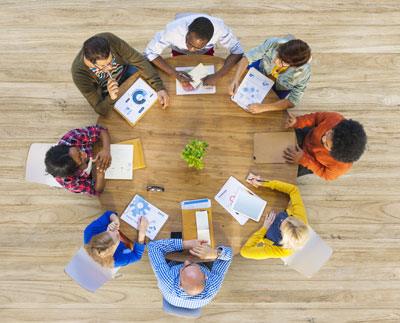 Many of the most urgent, important, and complex problems facing society today require collaboration among large groups of scientists.  The increasing prevalence of collaboration in science has been well documented across many different scientific disciplines.  In fact, studies of scientific publications find that there is a fundamental shift in knowledge production from an individual scientist model to a new team science model. There is an increasing realization that the ability to collaborate is a core competency of science. Although critical to science and innovation, teamwork is particularly challenging among scientists. The very nature of hard problems requires scientists who think very differently from one another to work together. These differences among scientists are further compounded by the reality that these scientists are working across different organizations (e.g., universities), economic sectors (e.g., corporations, government entities), and nations, not to mention time zones and cultural divides. Thus, not only does team science require teamwork, but it requires that scientists work effectively in “teams of teams”, which we call multiteam systems (MTSs). In order to understand and enable complex collaboration among scientists, this research project explored the basic question, which kinds of leadership and communication processes among scientific MTSs best enable innovation?

To study collaboration in interdisciplinary MTSs, we designed a classroom-based project that mimics many of the key aspects of scientific teamwork: requiring students working from different disciplines, universities, and countries, separated by time zones and cultural barriers, to come together to solve a hard scientific problem. The project linked classes in environmental ecology (at a US university), social psychology (at a second US university), and innovation management (at a European university). We ran the project for 2 years, studying 483 teams in 178 MTSs.

MTSs in our study tackled complex scientific problems that required input from each of the participating disciplines. For example, one problem the students were given was how to address “overfishing” in the world’s oceans. Students from Ecology had to consider how shrinking populations of certain species influenced the health of an ecosystem.  Students from Management had to consider the economic issues associated with the fishing industry, as well as how the local economies are affected. And students from Psychology had to understand what was required to help change the minds of stakeholders so that the fisheries would not become depleted.  Because of this, each team had to work as part of a science MTS to come up with an integrated solution.

The pattern of communication networks that connect the members of scientific teams have important effects on system functioning. We found countervailing effects of communication networks in scientific MTSs. Although some bridging communication ties, ties that connect scientists from different disciplines, are needed to connect different disciplinary groups to each other, when the number of these ties passes a threshold, bridging communication undermines the functioning of the disciplinary groups. This could be deleterious for the ability of a particular discipline to contribute to solving the larger problem.

We found that aspects of the leadership network patterns that emerge in MTSs positively predict the innovativeness of the solutions they generate. MTSs with leadership ties (1) connecting the members of different disciplines and (2) where members have about the same number of followers, predict innovation. Interestingly, we found that both of these patterns of leadership are unnatural, and less likely to form.

This material is based upon work supported by the National Science Foundation under Grant No. (SMA-1063901).